Trinidad & Tobago feature an especially high degree of biodiversity, more than most Caribbean islands. There are a total of nine distinct forest types.

The island of Trinidad in the West Indies, just 18 km off the coast of Venezuela, at 4,828 km² it is the fifth largest island in the Caribbean. Discovered by Columbus in 1498, it is the earliest settled part of the region. Since 1802 it had been under British governance until independence in 1962. With 1.34 million inhabitants (UN Population Division 2012) it is the second largest English speaking country in the Caribbean, after Jamaica. Tobago, a smaller island 36 km to the north-east, is about 300 km² in area. Including a number of additional smaller islets, the land area totals 5,128 km². It is a self-declared archipelago state (Parliament of Trinidad & Tobago 1986), thereby claiming more than 75 000 km2 of marine territory as an exclusive economic zone with strategic oil and natural gas resources based on its geometry and location on the edge of a continental shelf (Marajh 1987).

Trinidad and Tobago, as a small country, produces only 50 000m3 in roundwood per year, a modest figure on a global scale, but its forests cover 226 000 ha (FAO 2010), a sizable 44% of the total land area. Originally part of the South American continent, Trinidad features an especially high degree of biodiversity, more than most Caribbean islands (Blaser et al. 2011). There are a total of nine distinct forest types across a widely varying landscape including three ranges of hills with lowlands of sand, clay and even pitch lakes (GarageFreshTV 2015) and mud volcanos (Felmine 2011) in between.

The Northern Range contains the country’s highest peaks El Cerro del Aripo (940m) and El Tucuche (936m), the summits of which from 800m are home to elfin woodlands and cloud forests, habitat for the critically endangered El Tucuche tree frog (Phyllodytes auratus). Tropical evergreen montane and submontane forests are found lower down. In the foothills up to 300m above sea level, are evergreen seasonal forests, the most complex forest type in terms of species composition. These are the most extensive forests across the island, and though they have been heavily logged, still cover 94 000 ha (FAO 2010). This forest type is also known as the crappo/guatacre formation, as these two species Carapa guianensis Aubl. and Eschweilera subglandulosa Miers. respectively, tend to dominate the tree selection (Kenny 2008). There is also semi-green evergreen forest (14 000 ha), dry evergreen forest, semi-green seasonal forest and deciduous seasonal forest. 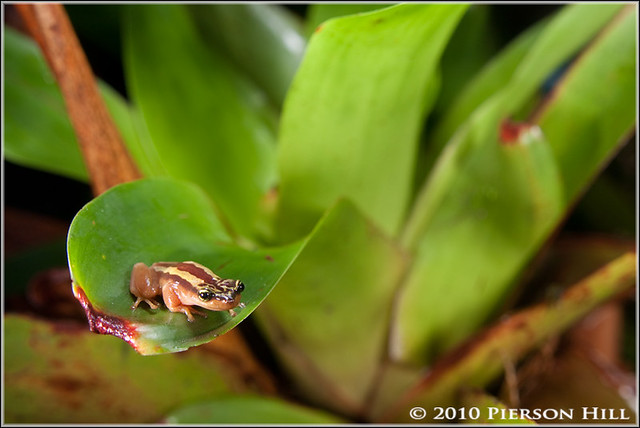 In the low lying areas are found both fresh and saltwater wetlands in the form of herbaceous swamp, palm marsh, marsh forest (14 000 ha) and mangrove forest (6500 ha). In the plain to the south of the Aripo peak, can be found the Aripo Savanna, a rare grassland ecosystem underlayed with a ferrous hardpan which prevents drainage as well as tree establishment. This area has experienced considerable human disturbance including settlement, illegal hunting, dumping, fires, quarrying and even use as a United States air base during World War II. It is now protected as the 1788 hectare Aripo Savannas Environmentally Sensitive Area and a comprehensive management plan has been in development to combine conservation and scientific research with guided ecotourism in a defined educational area (ASSMC 2008).

South of the Port of Spain, where the Caroni River empties to the sea, can be found the largest single area of mangroves, the over 3000 ha Caroni Swamp National Park. Mangroves provide oysters, crabs, fish and shrimp, but suffer considerable threats including the harvesting of trees for direct use as timber or charcoal, tannin extraction, as well as from industrial effluent, sewage and petroleum residues (WWF 2015).

On the east side of the island, south of the Central Range on the Nariva Plain, is the Nariva Swamp, the country’s largest freshwater wetlands. These are key habitat for the vulnerable West Indian Manatee (Trichechus manatus) and 49 individuals of only 61 critically endangered white-fronted capuchin monkeys (Cebus albifrons) on the whole island (IUCN Red List 2008). Farmers had cultivated rice in this region until the markets collapsed. As discussed in The Guardian article of April 29th, 2012, “Plum Mitan farmers fed-up” (Hassali 2012), many now produce watermelons and have experienced challenges with flooding. This is not very surprising due to the different hydrological requirements of the two crops. While the farmers have demanded water pumps from the state, agroforestry could provide a more sustainable long-term solution in which trees integrated into the production environment could help to buffer floods, transpire water and reduce the runoff of fertilizers.

Most of Trinidad & Tobago’s forests are under public ownership (80%), administered by the Ministry of Housing, Land, and Marine Affairs. Until 2010 this institution was known as the Ministry of Agriculture, Land and Marine affairs, which makes one wonder if that’s part of an anthropocentric trend. An initiative by this same department has also contributed to the reforestation of roughly 21 000 ha of denuded land, however the programme’s website does not seem to be up-to-date and there are more recent reports that they program may be shutting down units (Doughty & Gordon 2012). In any case about 143 000 ha of these public forests qualify as ‘permanent forest estate’, PFE (FAO 2010). The permanency of private forest is unreported, and so not included in these figures.

The country has systematically managed forests since the year 1765 and adopted its first policy for the sustainable management of its PFE in 1942. Updates to the forest policy had been proposed over the years, to account for changes in the country, but not until 2011 was a new national forest policy (Government of Trinidad & Tobago 2011) adopted. Trinidad is generally well regarded for its sustainable forestry and well known for it’s tropical shelterwood silvicultural system, but there may be outstanding questions as to why the forest is being degraded if this is the case. (Fairhead & Leach 2001). Enrichment planting is also practiced in natural forests when stocks are depleted. Outside of natural forests, there are 15 400 of teak, Caribbean pine and other tropical hardwoods in planted forests. Despite that this would seem like a good model for certification, even in 2015, it seems not one forest is certified, neither by FSC or PEFC. By some accounts, there are only about 15 000 ha of PFE meet current standards for sustainable forest management (SFM).

Plentiful oil resources have been a mixed blessing for Trinidad’s forests. On one hand they have reduced pressure on forest resources by providing an alternative income and energy source. At the same time exploration results in deforestation, and worse, the infrastructure through the forests requires roads, which in turn draw squatters, hunters, illegal loggers and marijuana planters (Patin & Ram 2010).

Despite the challenges to protecting the islands’ biodiversity and forest estate amongst mounting pressures, there seems to be a positive citizens movement towards various conservation efforts, like protecting sea turtles. As well, the Caribbean Natural Resources Institute, a policy development and research institute, is working on a number of relevant projects like watershed management through agroforestry, ecotourism, and non-timber forest products (Canari 2014). Hopefully this movement will grow, and a pristine tropical paradise can be appraised according to these more holistic values in order to finance a secure future.

Kenny, Julian. 2008. The Biological Diversity of Trinidad and Tobago: A Naturalist’s Notes.

Marajh, Patty. 1987. Maritime Boundaries Between Trinidad and Tobago/Venezuela/Barbados and Grenada – Its Impact on Offshore Oil. Theses and Major Papers. Paper 234.

Population Division of the Department of Economic and Social Affairs of the United Nations Secretariat. 2012. World Population Prospects: The 2012 Revision.